Wednesday, February 1 from 5pm-10pm; RPU’s online services, automated pay by phone, and automated outage reporting will be down for planned maintenance. We apologize for any inconvenience.

"After months of darkness light has come to guide the weary traveler home. And we have found that just for pay, the dreary night has turned to day. Oh, that our trials might now be over, Oh, that our pastures might be clover. Henceforth and forever this city shall be lit by its own electricity. And in the years to come we'll say, that was for us a glorious day, When first the streets and stores at night used arc and incandescent light."

F. B. Lambert had an idea that the event was important. His poem appeared in the Rochester Post to commemorate Rochester's first public utility: an electric lighting plant. Learn about RPU's humble beginnings and how it grew into one of Minnesota's largest utilities. 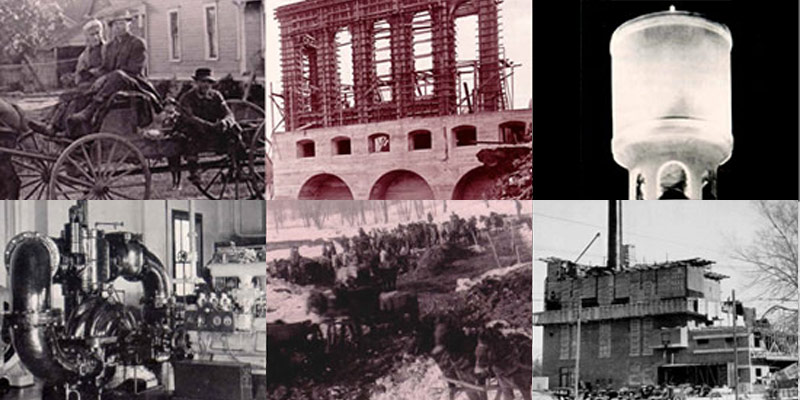 In the early 1890s, Rochester's population numbered just several thousand. Kerosene and oil street lamps had lighted the city’s main thoroughfares since the mid 1870s. But times were changing and the city was beginning to grow. By the late 1880s the City Council had seen and heard of the electrical power generated by municipally owned plants. Motivated by the need for safely lit streets and reliable electrical service, in 1892 the City Council (after several rancorous meetings) sanctioned the construction of Rochester's first public utility: an electric lighting plant measuring just 27 by 72 feet. After this plant burned down in October 1915, the dim working conditions and rough floor boards were replaced by the new plant construction on North Broadway.

The generator was turned by a belt from the enormous flywheel. To start the 16-ton flywheel for the steam engine, plant workers sometimes had to insert a long heavy bar into a hole on the wheel and manually crank the wheel to a position where the steam engine drive arm could move it.

On the gently snowing evening of March 14, 1894, Western Electric construction foreman A.C. Sprout switched on the current for lamps on the west circuit; moments later he lighted the lamps on Broadway. Spectators gathered for hours to catch a glimpse of the events inside the plant. Rochester's first municipally owned power plant generated electricity on March 14, 1894, but did not operate full-time until May when the city's contract with a private lighting company expired. By the turn of the century, the fire department had vacated the building and the Light Plant occupied the space.

Not attracting as much attention as the electric plant opening was the struggle the water works faced in the 1890s. The water company had difficulty showing a profit to the stockholders while still delivering water, main extensions, and service to the swiftly growing city. The water company was subject to disasters that cost time and money to recoup. When the pump house flooded during a 1903 flood, an engineer jumped into the water that was up to his head and adjusted the pump valves with his feet. During another flood in 1908, the whole water works plant was submerged and the boilers extinguished. A sprinkler truck kept Saint Mary's Hospital supplied from the well owned by Schuster Brewery. In 1910 the water company drilled its first deep well, about 418 feet deep.

Dr. William Worrall Mayo took a strong leadership role in developing Rochester's water and electric services. An outspoken advocate of municipal ownership of utilities, Mayo served a term as Mayor (1882 – 1883) and held a seat on the City Council.

By 1915, city growth indicated the water and electric service would face enormous demands. Rochester had grown nearly 15 percent from 1900 to 1910. 1910 to 1920 was the explosion in growth decade; the city grew from 7,844 to 13,722, a 75 percent growth rate! As a result, city leaders were looking at water and electric service changes for Rochester. The Utility Board, formed in 1904, would study building a new and more reliable light plant in 1915 after the Third Street Southwest plant burned on Oct. 31, 1915.

The hydroelectric dam and powerhouse were under construction July 1, 1918. The North Broadway Plant and new hydro plant could produce enough electricity, in that era, to meet the needs for a city of 60,000 residents. The Lake Zumbro facility has used water-driven generators to supply electricity for Rochester consumers since the powerhouse was placed in service on Nov. 7, 1919. In 1961, concrete workers refurbished the structure and remote controls were developed for plant operations.

The water department was created in 1916 following a May 25 bond issue to purchase a private water company. The Utility Board and City Council faced four service problems for the water department during the 1920s: water supply and storage, pumping capability, metering usage, and financing water main extensions. In 1924 and 1925, four static or artesian wells were bored on water department grounds near the Fourth Street Southeast pumping station. The only water storage was the Saint Mary’s Park standpipe (built in 1887) and 500,000-gallon underground reservoir (built in 1916 – 1917) near the waterworks. In 1924, a 200,000-gallon concrete water tower was completed on "College Hill" next to Saint Mary’s Hospital.

As the water department entered the 1930s, its pumping and storage problems that had seemed daunting ten years before found remedies to deal with the city’s growth. Rochester soon would have more than two million gallons of storage and a pumping capacity of 7,100 gallons per minute. Fire protection remained a vital concern, but 378 hydrants on the 38 miles of water main provided a far better safety net than the 208 fire plugs on the 17.5 miles of main when the city bought the system.

Eelectric - and gasoline-powered pumping machinery improved efficiency at the Fourth Street Southeast Water Works after it was installed in 1924. The eight-cylinder engine provided Rochester's first reliable auxiliary water pump when storms would interrupt electricity to the main pumping unit.

In 1928, the school system approached the Utility Board with a steam heating proposal to run a steam line from the North Broadway Plant. The steam used to run those turbines could be further used by ducting it to the school for heating and driving vent fans. Using the plant for these two purposes prompted the label "co-generating facility." Until maintenance and other costs reduced the net return years later, the Utility Board found willing customers in the central district for this relatively inexpensive and odor-free heat source. The steam system was operated until April 1986. Approximately 100 customers were on the steam service.

In 1937, People's Cooperative Power Association, a rural cooperative, negotiated an agreement to buy wholesale power from the North Broadway Plant. The agreement was approved by a representative of the Rural Electrification Administration from Washington, D.C., and all parties were pleased by the arrangement that was to last almost 20 years. By March 1949, the Co-op took 24 percent of the total annual kilowatt-hours of the electric department, while Rochester residential consumers used 28 percent. As the Co-op needed more power to serve its growing customer demand, it engaged Interstate Power Company in 1952 for that wholesale supplement and in 1956 the agreement between Rochester and the Co-op expired. The Nov. 21, 1956, Post-Bulletin recorded this account of the relationship: "The arrangement between People's Cooperative Power and the City of Rochester had been an excellent example of cooperation between a rural electric system and a municipally owned generating system. In referring to the harmonious relations between the two organizations, [People's Co-op] Manager Ray Krofchalk commented, 'We will always be grateful to the City of Rochester for the way it stepped in to meet our needs for wholesale power...when it meant the difference between success and failure of our efforts.'"

When the Park Board developed plans for the Silver Lake Park in the 1930s, the Utility Board requested that some of that property be used for a new generating plant. Construction began in 1947 with a groundbreaking ceremony. The new Silver Lake Plant went on-line in April of 1949. The 7500-kW unit was powered by a 90,000 lb./hour steam boiler and necessary equipment.

Silver Lake unit three was installed in 1962; unit two (1953) and unit one (1949) are the smaller generating units beyond number three.

In 1975, a 30-megawatt gas turbine unit was installed to supplement power during peak demand at the Cascade Creek substation, located between Seventh Street Northwest and Highway 14 West.

In 1978, Rochester joined the Southern Minnesota Municipal Power Agency (SMMPA) with Council approval. "Organizing and joining SMMPA was probably the most fundamental change that this utility has ever seen," commented John Miner, RPU General Manager from 1983 – 1986. "There has been and will continue to be spirited debate among its members about how well SMMPA does its job," he acknowledged, "but I believe, at this point, that SMMPA has accomplished what the founders intended." SMMPA allows its member cities to pool their electric power and meet their communities’ energy needs. Initially, RPU was a full-requirements member with SMMPA controlling all of Rochester's electric power. Today, RPU is a partial-requirements member of SMMPA and retains control over its own generating units.

With the introduction of the Clean Air Act in 1976, issues of power plant emissions, PCBs, and water quality were addressed by RPU and other utilities. Precipitators (to reduce airborne emissions) and cooling towers (to control water emissions) were costly additions. RPU's commitment to the environment did not end with costly construction projects. It has employed a full-time environmental regulations specialist since the late 1970s and continues to monitor all plant emissions. Since the mid-1980s, many changes have occurred at RPU.

Both the water and electric departments made efforts to place public service as their first priority. Yet one enduring feature of municipal ownership's responsibility to the public surfaced in the 1930s and continues today: the utilities return revenue to the city. In 2001, for example, the Electric and Water Departments returned $6,837,000 to the city of Rochester.