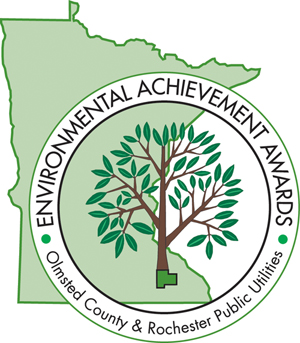 Recognizing community members, businesses, and organizations that make a significant contribution to environmental quality in Olmsted County is at the core of what the Environmental Achievement Awards stand for.

The awards were developed in 1992 to recognize individuals and groups that are making Olmsted County a more sustainable community through innovative programs and practices that demonstrate environmental leadership.

Completed nominations for 2021 are due by Friday, October 1, 2021 to Anthony Wittmer. 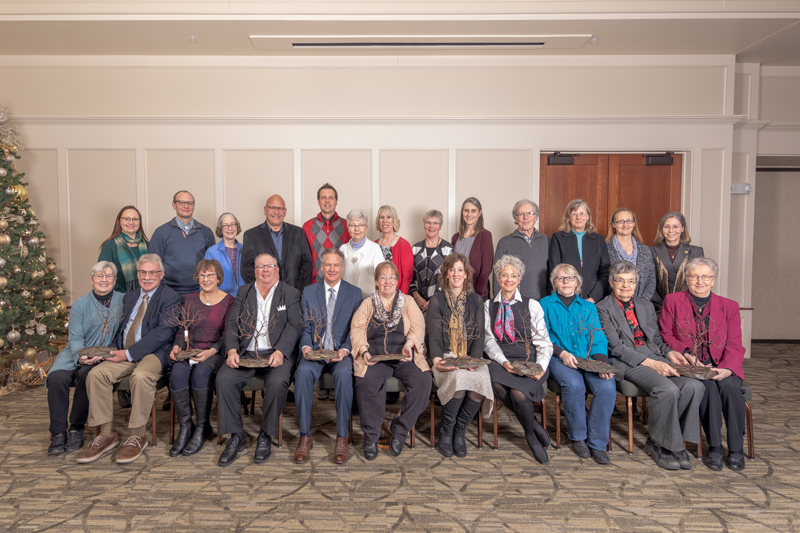 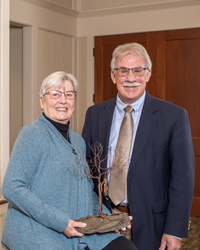 Minnesota Master Naturalist Volunteers, Pam and Michael Pagelkopf, were excited to respond to the call from Sara Holger with Minnesota Project Get Outdoors. She was looking to have a nature-based program developed for a small number of preschools in the Rochester area. The Pagelkopfs created “Nature with Pam and Michael” in 2011. Two schools are visited September through May with programs utilizing puppets, animal pelts, skulls, antlers and horns along with creative games, snowshoeing and binocular gazing. The programs engage the children with all five senses. 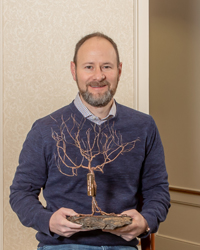 318 Commons is a mixed-use retail, office, classroom, and residential development located in downtown Rochester. This past year, the facility participated in Rochester’s Voluntary Energy Benchmarking Program. The program asked organizations and businesses across Rochester to share their utility consumption data publicly to develop an understanding of energy performance, encourage best-practice sharing, and accelerate the pace of energy conservation projects in Rochester.

318 Commons is conserving energy to a degree that separates themselves from other participants in the program. They are the only privately-operated facility in the top-20 performing facilities in Rochester. On a square foot basis, 318 Commons is consuming less than half of the energy of an average building that participated in the benchmarking program. The facility utilizes high-efficiency boilers, a two-pipe heat pump system, and conducts regular service checks. 318 Commons also educates its residents on best-practices regarding energy consumption. 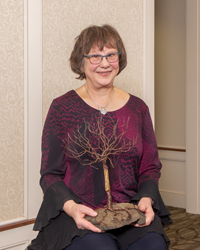 Sandy Bauter has been a member of the Rochester Chapter of the Minnesota Master Naturalists since 2015 and currently serves as the treasurer and outreach chair. If you’ve attended an environmental event in Olmsted County, chances are you’ve seen Sandy and her spinning wheel of native animal species. She has educated hundreds of community members at Earthfest, the County Fair, and Whitewater State Park.

Sandy also volunteers at Quarry Hill Nature Center where she has been a docent since 2016 and assisted the facility librarian with book inventory and organization during the Nature Center’s year-long renovation in 2017/2018. At Quarry Hill Park, Sandy is a “Weed Warrior,” spending many hours controlling invasive species. Additionally, Sandy volunteers her time driving injured birds to the Raptor Rehabilitation Center in St. Paul. 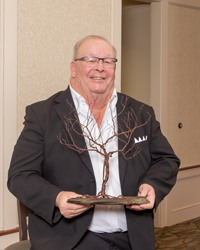 For the past 100 years, Lake Zumbro has been one of the most popular bodies of water for boaters and anglers in southeastern Minnesota. Formed by the installation of the Lake Zumbro Dam, this 600-acre reservoir is an important local recreational waterbody as well as a source of renewable hydroelectric energy. Over the years, the lake has experienced a lot of pressure from the discovery of zebra mussels in 2000 to increased sedimentation. The lake was declared an impaired waterway by the MPCA in 1998, and by the U.S. EPA in 2002. In 2001, Sheldon King took notice of the declining state of Lake Zumbro and decided to do something about it. Over the past 18 years, he was a strong advocate for the restoration of Lake Zumbro. Some of his significant contributions to improving the lake have included:

For years, Sheldon has been instrumental in restoring and preserving the beauty of the lake, ecological integrity, recreational quality, and the overall value of this unique natural resource. Shelden will remain active in efforts to restore the lake for current water enthusiasts and help preserve the resource for future generations. 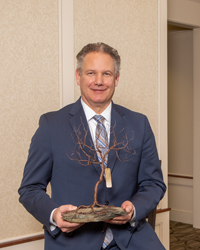 It takes a lot of water to keep the grass green on a golf course. But thanks to a recent investment in their facility, the Rochester Golf and Country Club (RGCC) will be using considerably less groundwater. In 2019, the RGCC completed the installation of an extensive drain tile system throughout their golf course property. This tile system collects stormwater and funnels it to a holding pond where it can be used as an irrigation source when needed. This project has reduced the demand on their deep well by over 60%, saving water and electricity in the process. Playing conditions have improved on the course making this a win for their business and water conservation. 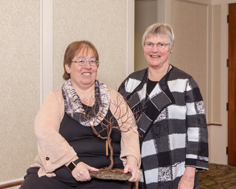 Community Food Response’s (CFR) mission is to help mitigate hunger in Rochester and the surrounding communities. Since 1993, CFR volunteers have been “rescuing” prepared food from restaurants and grocery stores that would have otherwise ended up in the garbage. The organization has operated out of Bethel Lutheran Church since the program began, with a second location opening at the Exchange Co-op in 2017. There are no income or residency restrictions to receive food at either location.

CFR has over 40 food donors and is supported by over 900 volunteers who pick up food, open, sort, and distribute it at both locations. In 2019, the organization collected approximately 125 tons of food and provided over 89,000 meals. 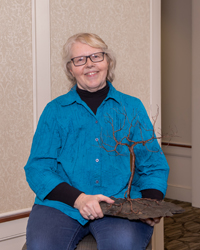 Sandy Hokanson has been a member of the Zumbro Valley Audubon Society for the past 10 years, and a wildlife artist for over 30. She is a professional graphic designer who volunteers her talents to create wildlife trail signs, with an emphasis on birds. These signs can be found at numerous parks in Rochester, Olmsted County, and beyond. Complete with captivating photographs, vibrant artwork, and helpful graphics, these educational displays rival anything you could find at a large zoo or nature center.

Within the Zumbro Valley Audubon Society, Sandy has served as a board member and as the organization’s president. She has used her creative skills to design and maintain the organization’s website and Facebook page. She leads field trips and assists with monthly bird walks at Quarry Hill. Sandy also organizes the Nature Art Show at Quarry Hill Nature Center, donating a portion of the event’s proceeds back to the Nature Center. 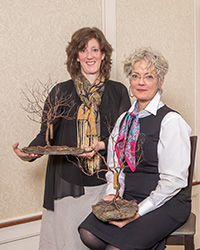 Heidi Kass and Kelly Rae Kirkpatrick have a passion for helping people grow their own food. In the spring of 2018, they initiated a collaborative effort with staff and volunteers from the Rochester Public Library (RPL), UMN Extension, Rochester Garden and Flower Club, and the History Center of Olmsted County to create the Rochester Seed library. The concept was simple. Residents with a library card could “check out” up to 10 packets of seeds per year. The volunteers spent the rest of 2018 planning and interacting with the community to figure out what types of seeds were in high demand.

By mid-February 2019, the group had packaged over 6,500 seed packets—with 44 varieties to choose from. A large seed donation came later, bringing the total packets closer to 8,500. RPL was a crucial partner, serving as the fiscal host and obtaining grants that were used to buy seeds and promote the program. RPL also serves as the physical location for the Seed Library which officially opened on March 2, 2019. Throughout the spring and summer, nearly 700 unique card-holders checked out seeds. Over 400 community members also participated in seed-related programs. The Seed Library is preparing for another year of distribution in 2020. 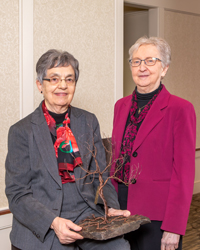 The natural landscape of Assisi Heights provides a peaceful haven in the middle of an ever-growing city. Deer, wild turkey, and numerous other animal species can be spotted on the property to the south and west of the Motherhouse, in an area known as the “Green Space.” Thanks to a proclamation of Conservation Easement this past July, much of this land along with the Motherhouse, Chapel, and Wilson House will be preserved in its current condition—72 acres total. This decision by the Sisters of Saint Francis is representative of a shared mission to strive for justice and reverence for all of creation.

Members of the Environmental Team at Assisi Heights have collaborated with the Conservation Corps of Minnesota and Iowa, as well as the Friends of Indian Heights Volunteers to clear invasive buckthorn and garlic mustard from the property. The Sisters also utilize solar energy, maintain a large kitchen garden, raise bees, and have made energy-saving enhancements to their building.